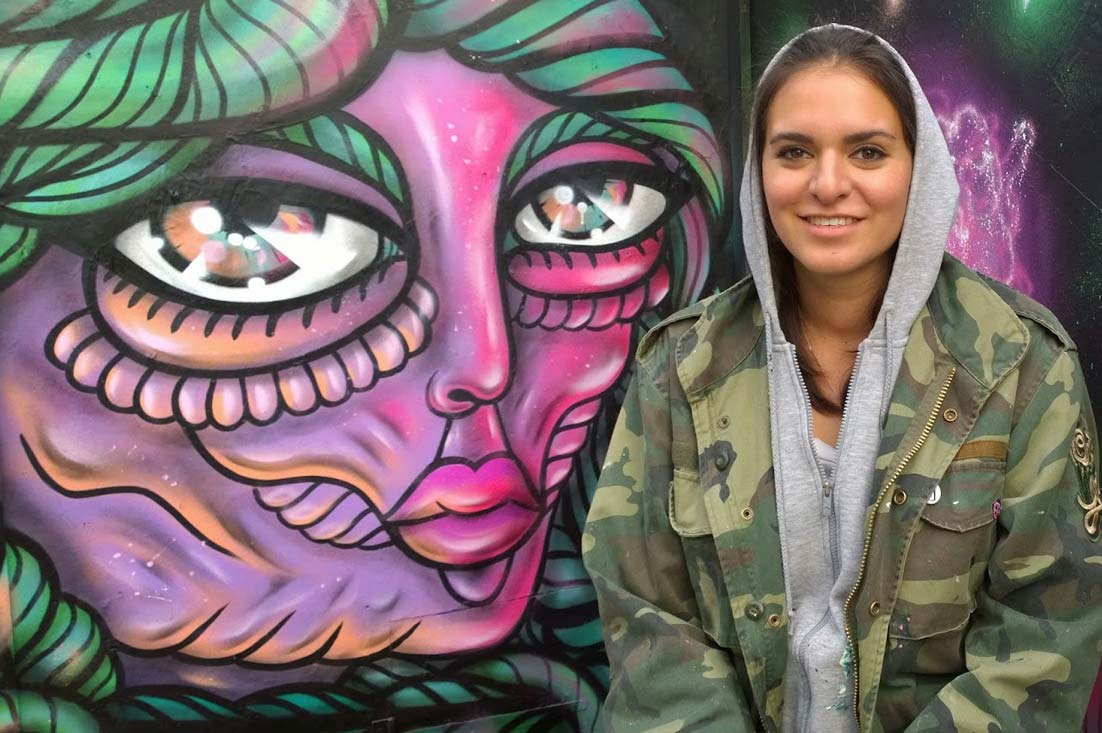 It’s not yet sunrise in late December when I first meet Amara Por Dios. As it tends to go at this time of the morning, we both happen to be sat at the tail end of the Village Underground tube carriage office. Amara, patiently resigned to the fate of every street artist in the UK at this time of year, watching rain thin out to a stop between intermittent caffeine breaks. Me? I’m just here for the heating. The kettle boils, tea brews, office chairs begin to fill.

Born and raised in the suburbs of Sweden, Amara has been building a name for her work from Stockholm to London, her characters, patterns, and endlessly vibrant colour-plays now populating East London’s well-worn streets and surfaces. After managing to pull off her starkly intricate monochrome design for Village Underground’s Holywell Lane mural in barely-there daylight hours, Amara came back to VU this week to paint our Great Eastern Street door in full colour. Now with work at either end of the building, we asked Amara to tell us a bit more about her process, the vast difference between the Swedish and British graffiti scenes and the double-edged sword of social media.

How do you group your work? Is it by collections, themes, or messages? Or is it just by what has inspired you when you start drawing?

Usually I have some ideas before I start. It’s just what comes to my mind really. I have so many ideas I want to paint but it’s just time, money and walls I need.

When I paint my walls I freestyle a lot. I have an idea in my head and just sketch it out roughly to get the proportions right. Some of my pieces have a meaning but it’s not obvious and it’s only me that knows the meaning. I want people to get their own thoughts and ideas on what the piece is about. I also like to hear what people think my piece is about and then I can get new ideas from their impressions.

You’ve worked on a variety of media, aside from technical difference, is the work thematically different?

Would you say your work had a feminine biological touch to it?

I guess so. I like to paint women. I just think it’s more fun to draw the hair and female features. But I also like to paint my monsters. I like to mix it up, sometimes to do more fun or crazy faces and other times to more serious or beautiful ones.

A lot of people think sometimes that I am a man. I don’t know why. When I’m painting on the street I have big clothes on and people passing by will say ‘good one mate’, ‘great work dude’, ‘awesome man’. One time I turned around and the guy that said the comment screamed because he saw I was a woman. It sounded like he got scared when he saw my face.

When I was painting the Village Underground wall a lot of people thought I was the assistant taking care of the scaffolding, or that the artist was my male friend helping me one day. Some people just don’t expect a women to be the artist – for some weird reason.

After starting in Stockholm you’re now based in London – how different is the street art and graffiti scene between the two capitals?

Until last year there was a zero tolerance policy for street art in Stockholm. I don’t paint that much illegally. I like to take my time and in Stockholm I wasn’t able to. you’re only able to do this at the legal walls but they are really far away and the work doesn’t last that long.

Sometimes there is a queue at the legal wall spots and after you have taken your photo of the finished piece, someone else paints over it two minutes later. It’s been good starting out in Sweden though. I was able to practice – lot from 2010 to 2012.

When I came to London to paint for the first time in 2012, I just fell in love with the city. There are so many walls to paint and it’s so much easier to get your work up. I met so many great artists that also become my friends. That helped me a lot when I started out here. You meet so many people – you get invited to exhibitions, paint jams and festivals.

Where are your favourite spots in each city?

I love to paint in Shoreditch. But I think I love to paint anywhere as long as it stays for a while. I don’t like to paint Leake Street anymore. People paint over it after a week and it’s just people tagging over the pieces.

In Stockholm, I don’t have a favorite spot. I’m looking forward to when more legal walls are available after the authorities drop the zero tolerance policy on streetart.

You’ve said before that you chose to paint the Holywell Lane wall in black and white because you didn’t have time to do in colour – are you pleased with the simplicity or do you wish you’d had more time?

I’ve been thinking about that actually. I’m really pleased with it considering my time and budget, as it would take me about 9-12 days to do it with color. But what I liked about it is that I did it in one go. Id there had been more time I would just paint and paint and go back and fix and redo. I didn’t have time to amend mistakes. I learnt a lot whilst painting the Village Underground wall, it’s my biggest wall yet and now I’m ready for any wall.

Does it bother you that black and white can get dirty easily, or is this just the nature of having your work on the street?

It bothers me a little bit but my pieces with colour get dirty as well. It just a part of street art. It can’t be nice and tidy.

You’ve got a really supportive social media fan base – especially on Instagram. What’s it like being able to see your work feature in other people’s lives in a way that was never possible ten years ago?

It’s crazy. I never expected to get so much of a following, so many people know my work and who I am now.

When I painted outside a Gothenburg skatepark, a guy skating there was also following me on Instagram. And when I was painting a backyard in a posh part of London, a guy who caught my work happened to be following me online too. So many different people from all over the world are seeing what I’m doing through social media and it’s great.

The only negative is that so many more people are copying my work and taking all the credit for themselves. There was a girl in the States that was literally copying my pieces from Instagram and she was selling it. When she got exposed she changed her name many times and made it private. It has happened on three or so occasions with other people.

Obviously they know they are doing something wrong but they continue until they get caught. Don’t get me wrong -I’m really happy when people get inspired by my work, but when they pretend they came up with it, it makes me annoyed. I know I can’t do anything about it so I can’t take it that seriously.

In late July Amara came and repainted our door, here’s her Instagram

For more photographs of Amara’s work at Village Underground, head over to our Flickr album.