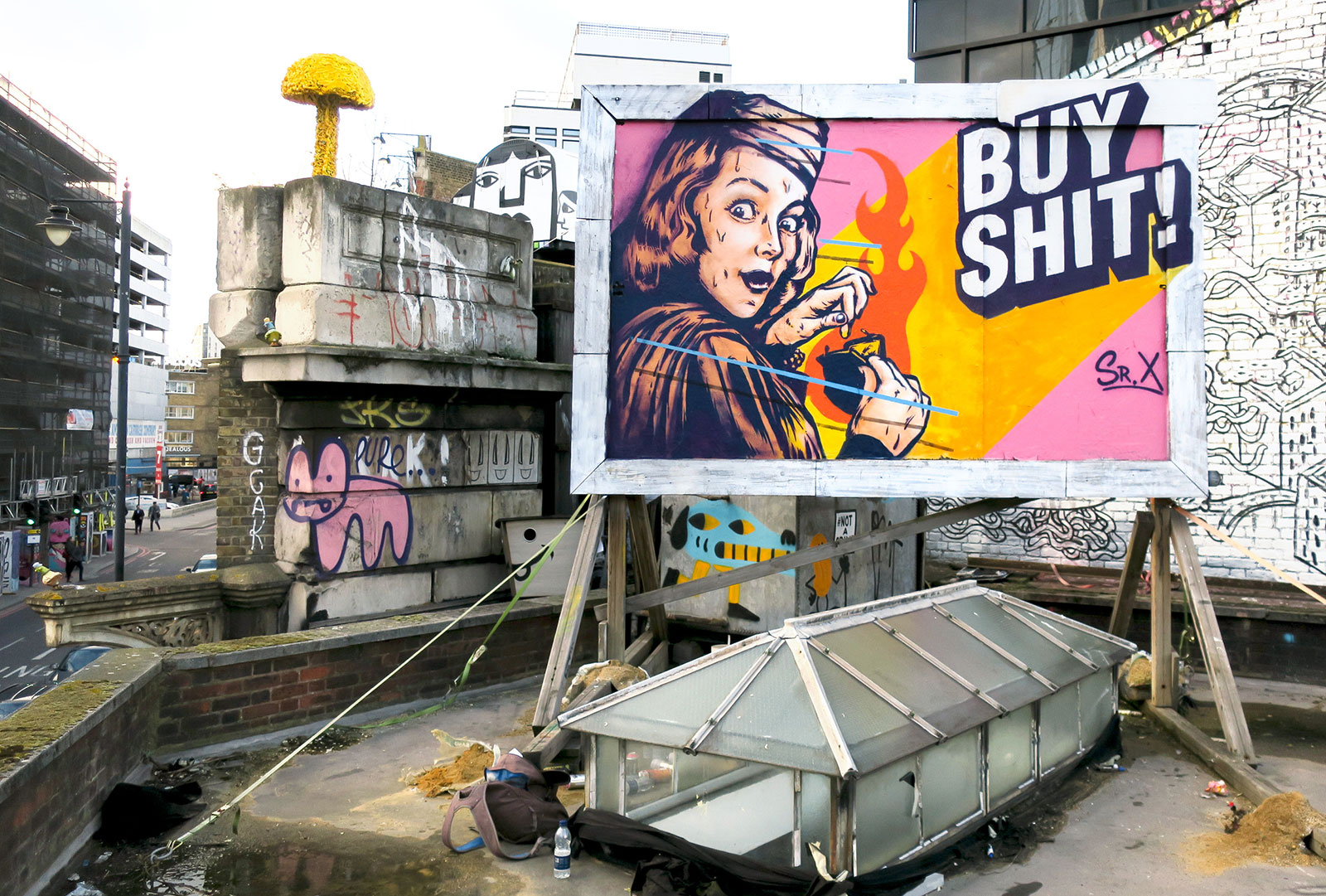 Spanish urban artist Sr. X fills his work with irony, technicolour sarcasm and the kind of updated pop-art we can’t get enough of.

He’s currently got us surrounded, having bedecked our Holywell Lane wall at the end of last year, and now our Great Eastern Street rooftop too, with a wonderfully tongue-in-cheek message to head over to his website.

Dan Davies managed to catch Sr. X in the days after he finished painting his Penitenziagite design on our Holywell Lane wall. Sr. X been working as an urban artist for the past decade and started to paint in London three years ago. Here’s what he had to say on approaching his largest mural to date.

VU: How did you find working on this wall with the traffic, the public and the weather?

SX: Regarding the traffic and the public, it was busy but there were no real problems. With the weather, even if it was really cold, I can’t complain too much because it just rained a bit. I was pretty lucky in that respect. Overall all was pretty cool!

VU: Is Holywell Lane one of the biggest walls you’ve done for a while?

SX: Actually it was the biggest one ever… I’ve done a couple of pretty big walls that were higher, but this one is the biggest overall for sure. 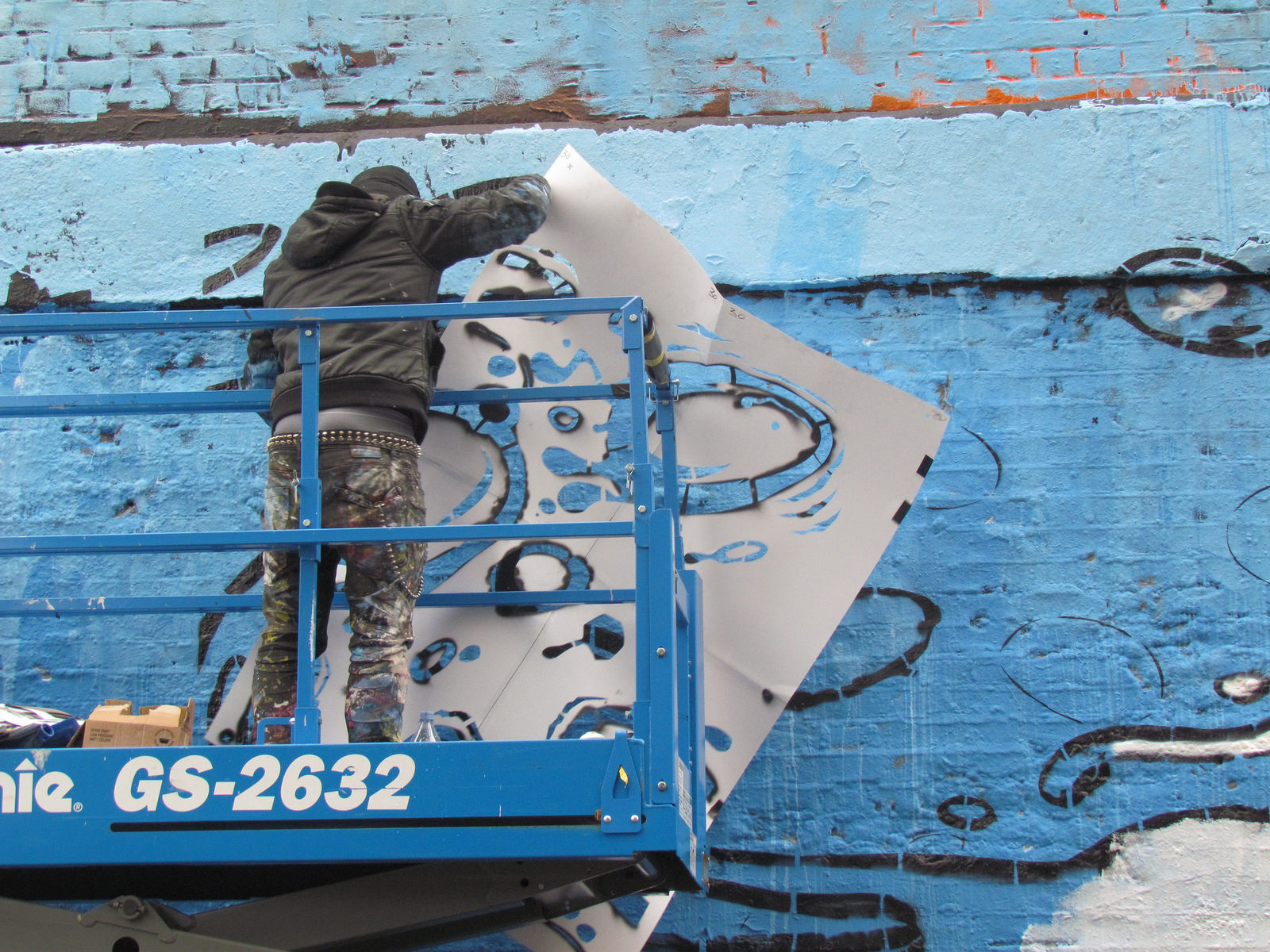 VU: Describe to me the process of getting a stencil this size on a big wall… how do you make all the parts of it?

SX: Design-wise it is all good, you just need to work on scale, keeping the format of the wall. The problem comes when you wanna send the piece to print. It was 32 double A0 and it all needs to fit together perfectly when you’re on the wall. So, it becomes a bit tricky, but with a bit of maths and planning, it’s all okay.

VU: Have you called this piece Penitenziagite – tell me what this name / war cry means to you?

SX: I’ve named this piece after a scene in Umberto Ecos’ book, The Name of the Rose. They say that it was the war cry of the Dulcinists, when they were about to kill the rich, but the key sentence that I love in that dialogue is “the distance on between the static vision and the sin delirium is too short”

VU: I know you like to let the murals speak for themselves and this picture is more surreal than many of your direct message pieces but what does it resemble to you?

SX: Most of the times, I like to give a direct message with my pieces, sometimes more obvious than another, I do art as a way to express myself and tell the things that I need to say. But, as an artist, I also love surrealism, dadaism, free association. I think that sometimes, when you have something in your head, you need to go for it, even if it doesn’t have a clear sense. I found that therapeutic, relaxing and really fun and I admire the artists that are able to do that through their whole career.

For this one, I just saw the image of a bearded man in an old advert and instantly I saw a pizza instead of a beard. I kept the sketch for some time but I wanted a big wall for it and this was the perfect occasion to develop it. The best interpretation is from Heroica, an artist friend of mine when she said that she fell lust, loathing and hunger at the same time. 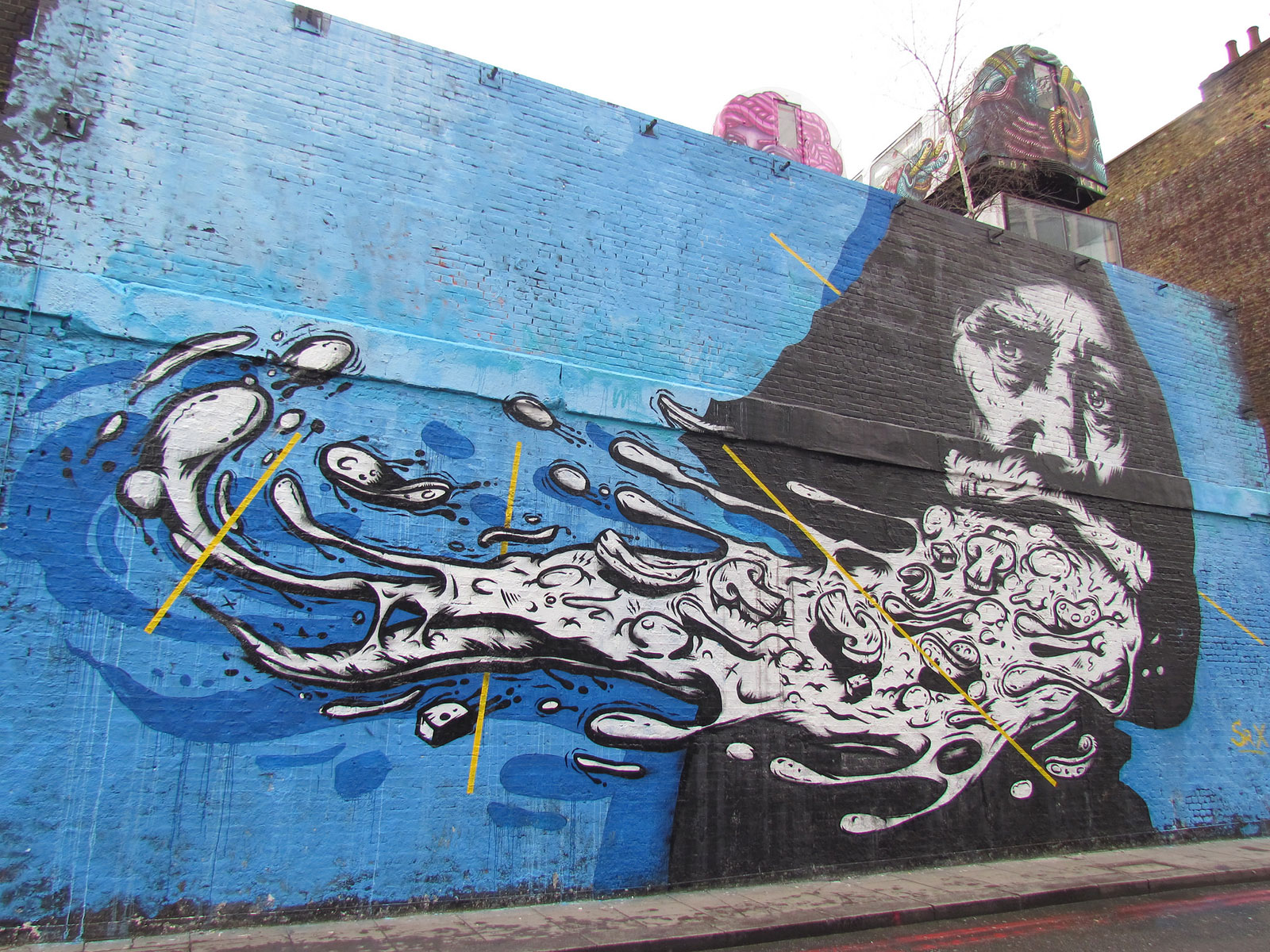 VU: There seems be something about the American “consumer sick” that we have to take every day and it feels quite political thinking about America vs the world… Glenn Max, our Artistic Director, said he thinking “a lot of it has to do with the filth we’ve are the garbage and waste we create….we are what we eat, what we wear, what we spew…”

SX: I really really love to hear the people’s interpretations of some of my pieces. They are inspiring and fresh and they help me a lot on developing new ideas and to see different sides of my work that I didn’t think of.

I don’t believe that you should give a really close meaning to a piece of art, I like to let them breathe and live by themselves. Some of my pieces are a bit cryptic or unclear even for me, but they all come from deep inside and I feel really good when I let them go to the surface.

VU: I also really enjoy your more billboard subverted advert pictures too, do you change adverts or are they usually based on paintings / prints you do?

SX: Most of my paintings have a strong social content, because more often than not is what want to express. I love to work with 1950s or 1960s American advertising because I think that they are still pretty relevant. Those fake smiles, perfect families, awesome holidays and imperative slogans, commanding you to have fun or be better are, for me, a great and disturbing reflection of the current society, with the mass media control in a global way and the social media giving pretence in a more individual way. It’s all really fake and really wrong if you just scratch the surface.

VU: Was the billboard above the gallery based on an original 1950s work?

SX: Yeah, it’s in that kind of style but with a pretty direct message. It’s a version of one of my studio paintings. I wanted to paint it in the street for a long time and when you told me about this spot i thought that it would be the perfect fit for it.

VU: Finally – after painting here for three years, how do you find the London scene – are there any differences to painting abroad?

SX: The main difference for me was that in Spain I was painting mostly illegal – quick pieces with strong context – you need to be effective in what you want to say in a short time. In London, there is a lot of possibilities and you can get a lot of legal walls from different sources. This allows me to think and work a lot more in the execution of the piece and not only on the message. I think that London is a really good place for street art. Regarding the scene, it’s great. You can meet most of the best street artists in the world, visiting or living here, and that’s really inspiring.

You can come by Holywell Lane to see Sr. X’s gigantic Penitenziagite in bricks and mortar, and his Buy Shit billboard on our Great Eastern Street wall.

Sunset from our with our @christiaannagel mushroom