GIVE AND TAKE WITH DAKHABRAKHA

“There are no lead singers in this band,” says Marko Halanevych as the band get into position for our backstage photographs “there is no frontman, only three front women.” 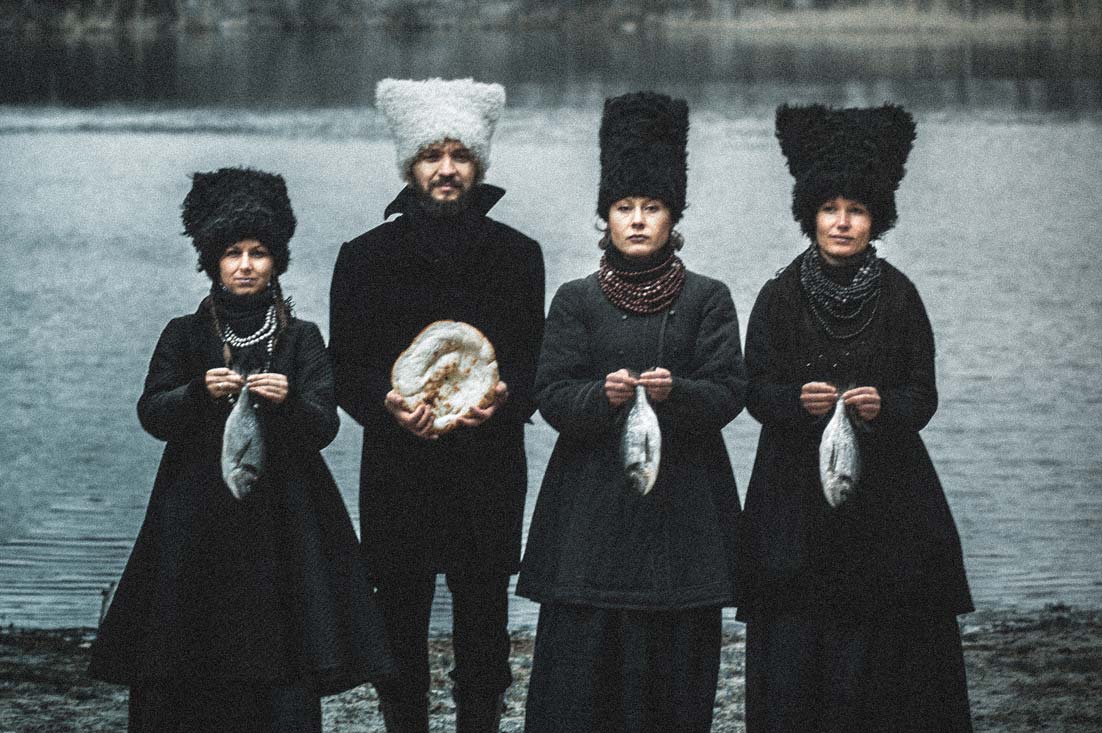 DakhaBrakha take to the stage in a packed Village Underground. The audience, which has tripled in size since their Later performance, is locked-in after a polite introduction, a polyphonic war cry and a barrage of barrelling drums.

Their name translates as “give and take”, a reference to their approach to creating music but also a description of their relationship with the crowd. “It describes the energy between the us and the audience”, says one of the front women Iryna Kovalenko.

Conceived in 2004 at DAKH, the Kiev Centre for Contemporary Art, by avant-garde theatre director Vladyslav Troitskyi, DakhaBraka’s intentions were to rejuvenate dying Ukranian folk music traditions. The quartet quickly gained a young enthusiastic audience in their hometown and throughout the country.

“When we started 11 years ago what we were doing was really something new, old music wasn’t very popular. We were really one of the first groups to play Ukrainian folk this way. Now it’s more popular, and also world music has become really popular in Ukraine. Now we’re successful because it’s something genuine – not like pop music which is the same in every country. This music is special and people are ready to listen to it.”

Walking around the crowd of Village Underground, it’s a very mixed demographic. I hear a middle-aged couple gasp as they see our vaulted roof for the first time, I see a group of young Ukranians politely shushing someone whilst the band are recreating a series of birdcalls on stage. The shift from screaming delight to quiet tender moments does catch out chattier audience members. This sudden flip to anarchy is what they call ‘ethno chaos’.

“When we started the older generation were unsure of our authenticity. We think they were worried that if we didn’t do it the right way that we were spoiling the music. Those people were more like scientists [music anthropologists] and they wanted to preserve and control the music. We tried to change them [the songs] and give them new life. Most of them have changed their minds now, and many people try and put their own style into traditional music”, says Iryna.

Part of the reason why DhakhaBrakha are successful in Ukraine is that they do care about the varied folk music of the country. Iryna, a graduate in folklore, is passionate when she talks about how DhakaBrakha wanted to create musical map of Ukraine with their songs

“It’s as varied as the geography – whether it’s seaside and mountainside, for example. The main feature is the Ukranian polyphonic tradition especially with women’s voices – we use this way of singing very much in our songs. But Russia, for example, does not have this type of singing so much, this is a very special thing for Ukraine. In Russia, they sing with one voice but with Ukrainian we sing in several voices.”

Iryna, who is still at actress at DAKH, calls the show a “performance” rather than a concert. Band members strike statuesque poses, turning toward the audience with choreographed movements as they deliver their lines. At one point, cellist Nina Garenetska turns to the audience and delivers a piercing monologue, Olena Tsibulska pounds the bass floor tom and Marko throws out little “heys” and “ho’s”. The song has a definite hip-hop feel.

“It was recorded in Carpathian mountains where they have this special song form, the style is very rhythmical. It is a really funny story about a woman trying to find a husband and going around 100 different people and no-one is suitable. One isn’t rich enough, another has a difficult mother and in the end they can’t choose one. With the rhythm and humour, it made sense to turn it into a rap – not really hip hop but our hip hop. We like gangster rap and we do play a little bit with that element, especially when we perform it live.”

I ask Iryna whether the story that they tell is the same as their excellent animated video,

“We don’t like to see a pitch that is just a visual version of the lyrics – you always want to leave some space for the imagination. Also, a lot of what we sing about is difficult to film [and] to put it on television – it’s quite hard to get our music played on the radio and we have the same problem with video. We are always open to an artistic vision and a lot of young people want to do a video for us, so we ask them them to write a storyboard and see whether it will fit with one of our songs.”

The cheering from the crowd after each song comes in waves, the audience cheers and the band are visibly overwhelmed by the reception which prompts another set of applause. Their closing song prior to encore has a tiny bit of English before it transcends to chaos.

“When music is good it’s good – it’s not about politics, or language”, says Iryna “We try to share our opinions and culture with people. The main thing with music is that it’s energy, they [the audience] feel the energy and they understand our emotions even without any words.”

“We are very serious band” by Julian Mährlein

This article is based on Q&A first featured on The Quietus.