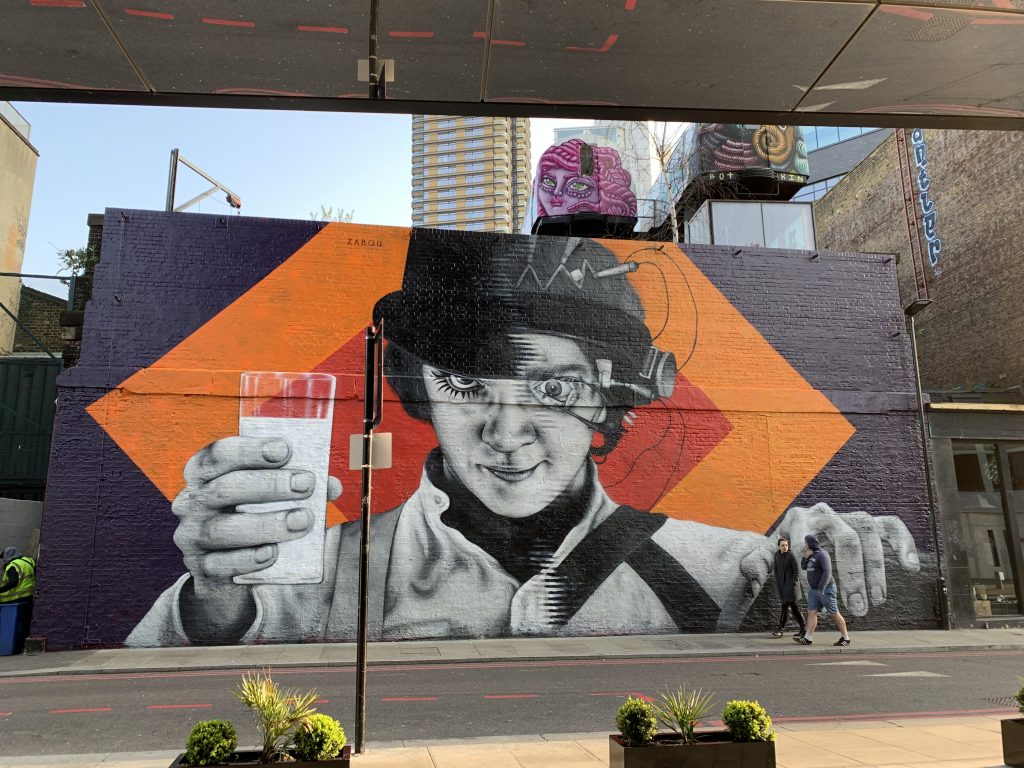 If you’ve wandered down Holywell Lane in the past week you will no doubt have noticed our newest mural of controversial cult icon Alex from A Clockwork Orange – one side of his face the bloodthirsty sociopath, the other the tortured prisoner.

We caught up with Zabou, the artist we invited to paint the wall, to talk about her style, her inspiration for the piece and what goes into making something so realistic.

French artist Zabou has been based in East London for around eight years starting her life as a painter of small works, using stencils mainly.

“I went into more free-hand spray painting after a while, then I’ve just been developing my style for the last three years. I’ve changed a lot and now I’m doing more of these grayscale realistic portraits, surrounded with strong colours and I like to do designs with a little twist.”

Once you’re familiar with Zabou’s style, you’ll forever recognise it (maybe you’ve seen her mural of Sherlock Holmes, David Bowie or Salvador Dali). But what response is she after with her work?

“Generally I think what I like is to create a surprise… Someone just walking by past a mural and they’re like ‘oh!’. Just getting their attention and then from that hopefully triggering some kind of reaction which could be surprise, wonder, inspiration… It’s so great if I can inspire someone! When I get messages like “ah I saw this and then I did that”, I’m like – ah my job is done.” 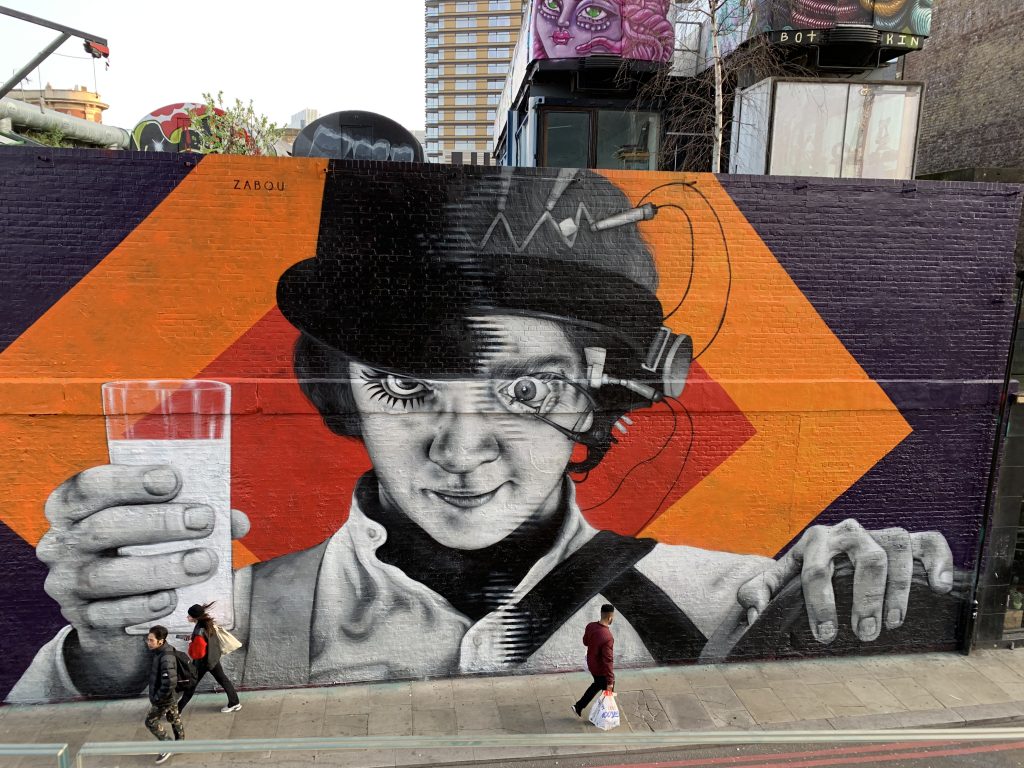 It’s clear that Zabou’s work will always evoke a reaction from whoever who walks by, but how much of that reaction is down to the person she’s depicting? A mural of Malala Yousafzai will evoke a different kind of reaction to Alex from A Clockwork Orange…

“Sometimes I like to paint someone anonymous, just if they have an aura. But sometimes I like to select someone famous or iconic. The cool thing is I mostly have total freedom about what I am going to paint. There are so many characters I want to depict and talk about!

“I actually painted Jack Nicholson from Kubrick’s The Shining in London as well because I watched the movie and I found a spot that was perfect for it. And I had A Clockwork Orange in the back of my mind for such a long time. I’ve read the book, watched the movie so many times, and it’s also related to London because they shot the film here.”

We move onto talking about the film A Clockwork Orange’s difficult history in the UK, having been banned by Kubrick himself, after the film was allegedly responsible for copycat violence. Does painting Alex contribute to him being made an icon (a problematic thing for some)?

“It’s always a risk I think. When I was thinking of the design I wanted to make it a little bit different so it’s not just a beautiful boy sat there. So I thought I’m going to split it with the worst thing that happens to him. Hopefully there’ll be this kind of repulsion or revulsion as well as liking of the character. And I think people can look past the aesthetic of the violence.” 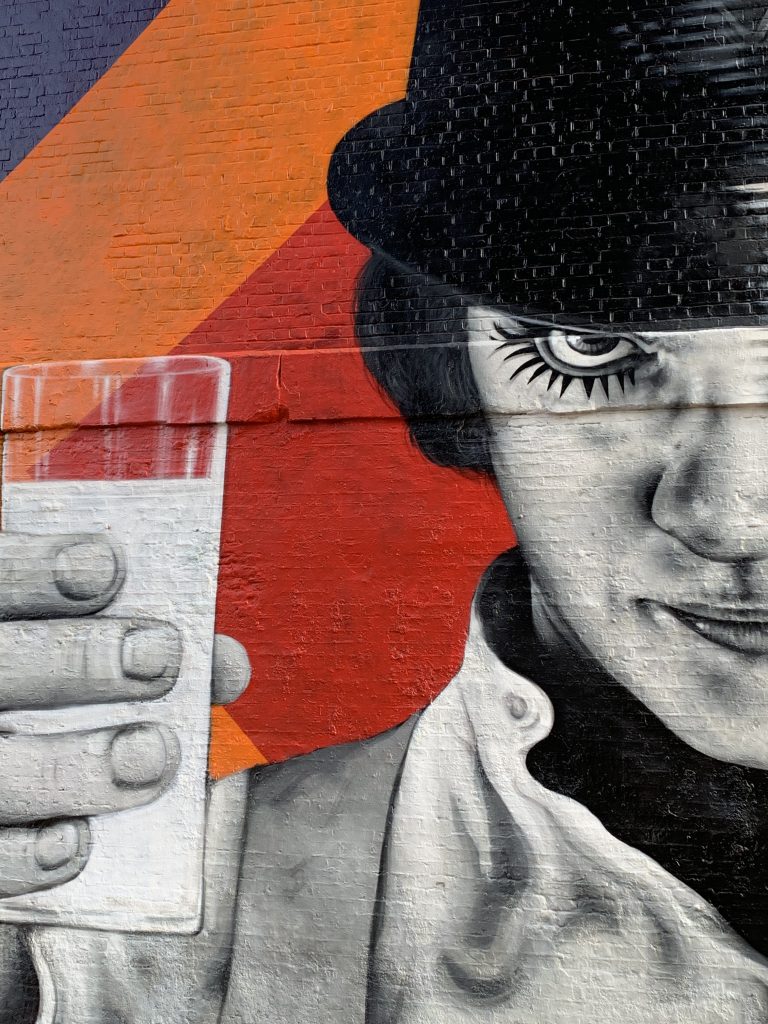 What was behind the idea of the split effect?

“Alex is the main character obviously he’s super iconic in his outfit and the first design I did was the left side that you see now, sat down with the eyelashes. And I thought, ok, this is a great image, but how am I going to twist it? How about I split Alex into these two parts because it’s really about his violent attitude and the violence of the torture. I’d never done a split design before so for me it was challenging. Then I added this glitching effect sort of like a TV to connect both parts. The book has so many different sides – I couldn’t show everything, but I managed to do two sides which are very key to the movie.” 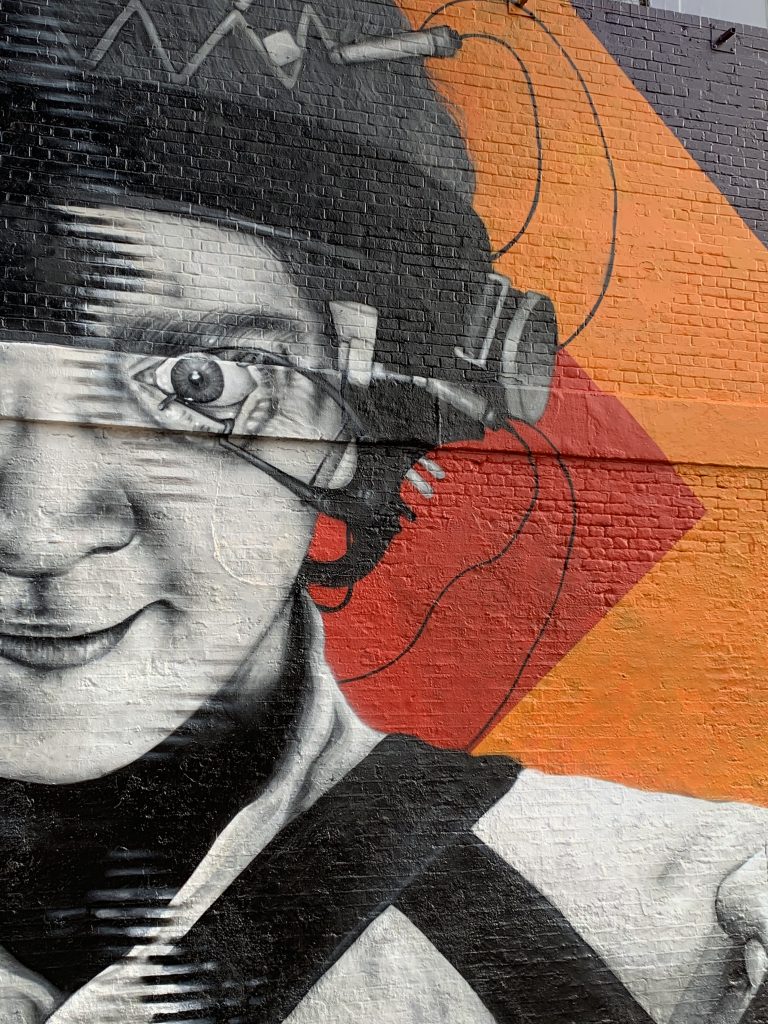 It’s this split face that gives the audience/spectator interaction that Zabou is after. Even approaching it from a certain side will give you a different first impression. Zabou went on to explain the technical aspects of the work and how she creates such realistic portraits.

“I use spray paint and each can has a specific shade of colour. You can’t mix too much. You can blend them a little bit, but it’s not like acrylic paint where you can just take black and white and make all sorts of greys. So I have to use a whole range of grayscale. I start with the darkest areas of the face then I build up to the light and brightest.

“I’m not trying to be hyper-realistic, my goal is to create a face or an artwork that will transmit emotions. Especially the eyes and the face – that’s super important.”

How many types of grey are we talking?

“So for this I used 10 greys plus black and white, as well as transparent sprays – these are literally to create tiny tiny effects, for example if you have wrinkles, dimples, for eyelashes and any reflections in the eyes. It was about 15 different sprays for the face alone”

Before you even get to the colourful background…

“Usually I don’t do geometric patterns, but a colourful background – it could be a city-scape or flowers etc. I rarely do geometrical because it’s such a pain! You need masking tape and there needs to be two of you. It looks simple but it’s so hard to do sharp lines. 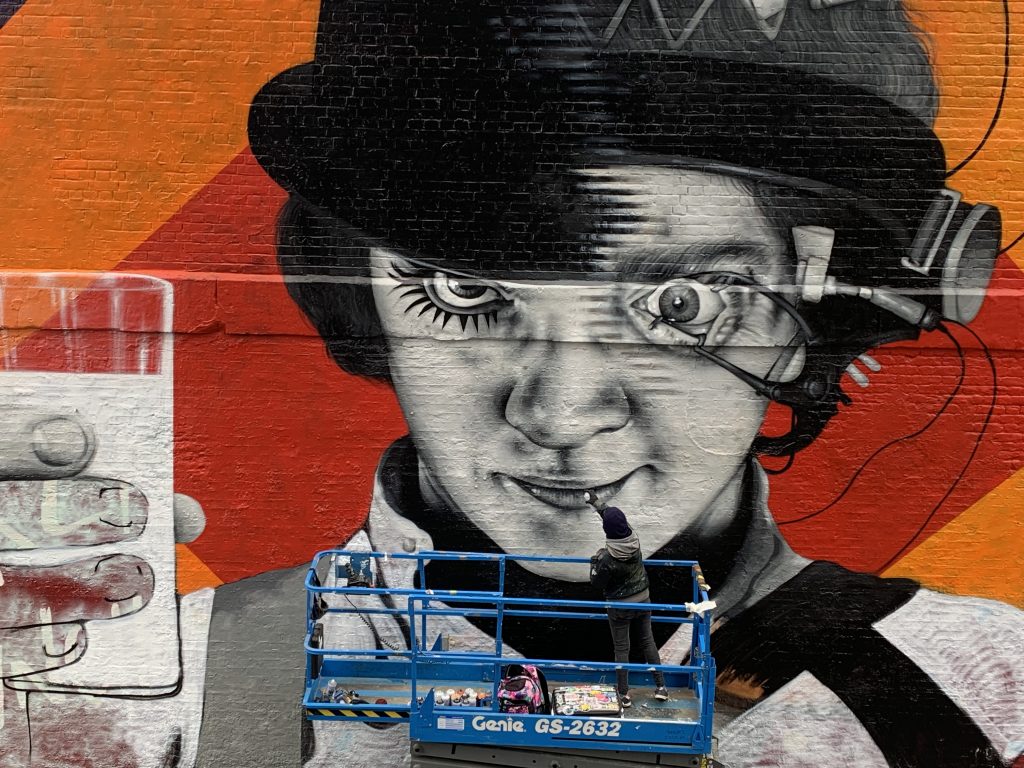 “For this one I was thinking at first to do circles to make it a little bit trippy, but then I just thought rectangles would work well and I had to have orange obviously…”

‘The Glitch (Clockwork Orange)’ will be on our Holywell Lane wall until the end of April. And if you’re as into Zabou’s work as we are, make sure to follow her socials to see what’s she’s got coming up.

All photos courtesy of the artist.