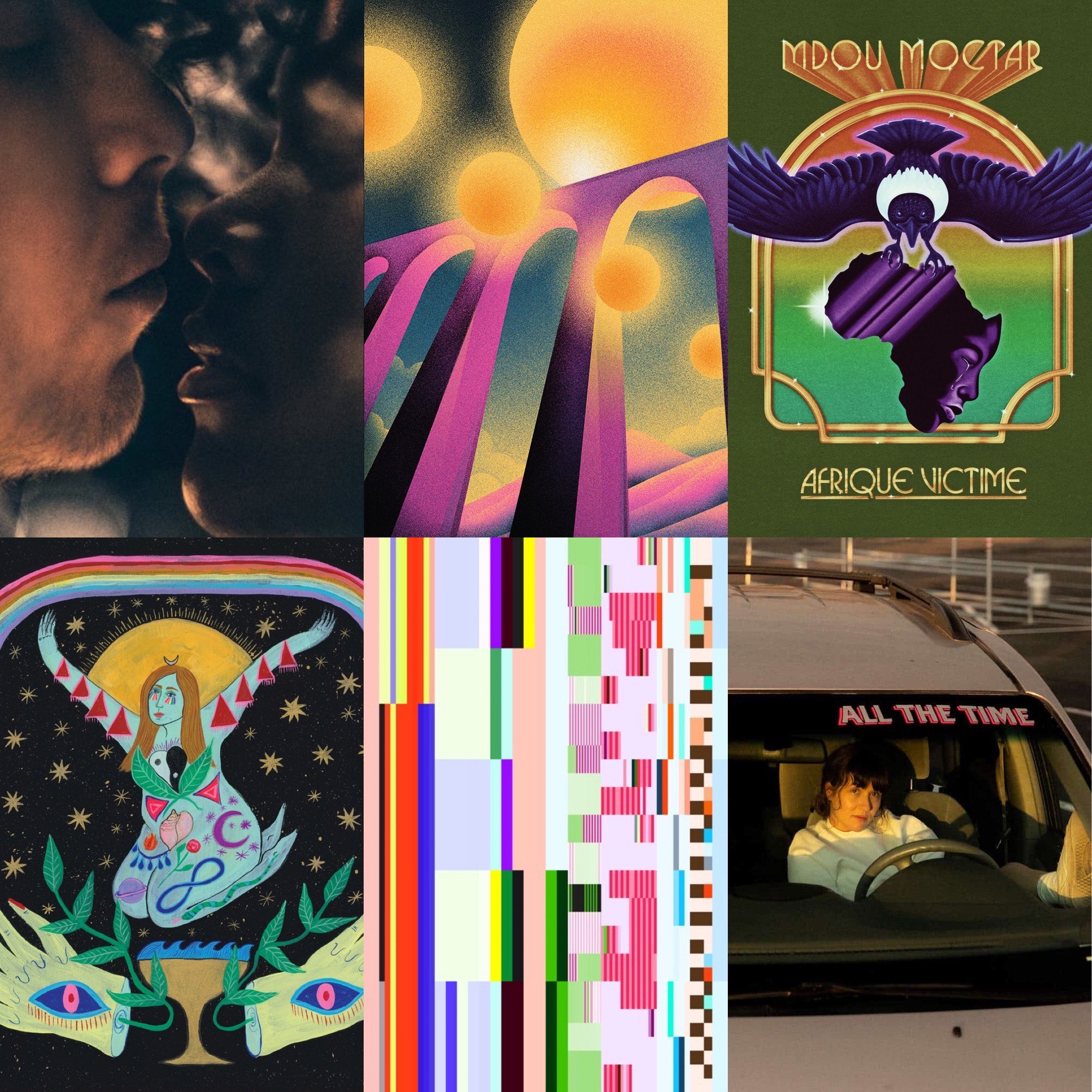 As we await the first signs of spring, we asked our team across Village Underground and EartH to share the artists and bands they’re most excited about in 2022. From Turkish psych folk and Tuareg guitars, to Chicago footwork and spiritual jazz-funk, there are plenty of fresh sounds to look forward to this year.

Hit play to listen to our New Noise 2022 playlist on Spotify, as we blend up-and-coming artists with established acts, familiar favourites and brand new tunes.

Read below to find out why they’re unmissable…See you out there!

“I came across Jeremy Underground through his regular collaborations and b2b shows with Motor City Drum Ensemble and his historically iconic set from Lost Village which they released from the archives during lockdowns (labelling it as one of their most requested sets from fans of the festival) – I’ve been excited to see him ever since. Filled with golden dance gems and outrageously tasty rare grooves, he knows how to get people wigglin’ and jigglin’ – expect a gloriously uplifting set that showcases his phenomenal crate diggin’ abilities.

Dimitri has been one of my favourite DJs and remixers for nearly a decade. I first heard Bondax drop his version of Prince’s ‘I Wanna Be Your Lover’ at Reading Festival 2013, this sent me down a long-term rabbit-hole of deep cut disco edits, falling in love with groovy DJ events, building a vinyl collection for DJing with, and ultimately contributed to my desire for working in live events. Now here I am.

His sets are full of house gems and disco classics, his own reworked versions always ring true to the soul of the original but elevate their instrumentation and provide a welcomed extension for the dancefloor. I always try to catch his groove-fuelled shows when he comes to London.

Here’s a few of my fave Dimitri edits/remixes:

– Lost in Music by Sister Sledge

– Moment of My Life by Inner Life

DJ Paulette is an absolute legend of the club scene that I somehow only discovered during the 2020/2021 lockdowns when she was spinning on Twitch and featuring on raid train livestreams (such as Glitterbox’s ‘Where Love Lives’ virtual festival – you can enjoy her full set here) – she has a history spinning at the likes of The Haçienda, Ministry of Sound, Heaven, and The Zap Club. An eclectic selector covering garage or disco, and from house to R&B, who always bring huge energy behind the decks – I always think the best DJs are the ones who dance to their tunes as much as the crowd.”

“I cannot wait to catch Altin Gün live. I’ve loved this band since their 2018 debut album ‘On’. They play traditional, joyful, Turkish psych folk with a seriously groovy rhythm section. Their music is far out but equally accessible and made for dancing. The band have only played a handful of shows in the UK and this will be the first time I’ll catch them live! Not to be missed!”

AND TUESDAY TUESDAY 15 MARCH AT EARTH

“I’m looking forward to our residency with New Regency Orchestra. When Total Refreshment Centre and Comono told us of their plans to put together an all star Latin Big Band residency with its home at EartH I jumped for joy. As an avid record collector I’ve been down many a Latin jazz worm hole and over the years it’s influenced the house, hip hop and drum and bass I’ve listened to, not to mention the new jazz movement of recent years. If November’s show was anything to go by, it’s going to keep getting better and better. Walking into EartH Theatre that day was like being transported to another time and place. So good!”

“In a bid to become more cultured, I had booked tickets to go see one of her shows at Sadler’s Wells a few years ago – my first contemporary dance show. It seemed to be a collaboration with Brian Eno so I was intrigued – it was called Golden Hours/As You Like It.

It started with the dancers walking towards the audience, very slowly, back and forth, over and over again. It was set to the Brian Eno’s song ‘Golden Hours’… which was played at least 4 times in a row which is at least 16 minutes long… 16 minutes of wondering if that was a mistake, wtf is happening and I’m never going to last 2 hours of that. When the music stopped, it never started again – the whole piece was danced with no music. And it turned out to be one of the most amazing shows I’d ever seen. I’d never seen anything like it, there was something relaxing in the lack of music and dance turned out to be one of my favourite ways to see an artist express themselves – it’s so intriguing, we know it’s really hard and physical, but it looks so simple and beautiful.

There’s something hypnotic in the dancers’ moves, especially when they all dance together, and the lack of music or the music being very minimal allows you to make the piece what you want it to be – if you feel so inclined! I was absolutely captivated by it.”

By Bronya Francis, Head of Marketing:

“EartH seems to reflect my taste in that I usually know most of the acts that get booked at the venue, but Yseult was one of the acts I discovered only once we confirmed her booking. She sings in French and there is something about French poetry that is so much more interesting syntactically and rhythmically than English.

Yseult was first discovered on French reality series Nouvelle Star and after that released a record that’s pop and upbeat, but her recently released music is a lot more arresting and has taken a change of direction, probably as she’s become more independent as an artist since then. Her latest singles are more downbeat and full of yearning. She has a vocal that’s simultaneously smoky and powerful. It’s music full of heart – there’s a certain unique passion in the French DNA and I love how she unashamedly communicates that through her creative output.”

“I’m really excited to watch Baynk. I came across his music through researching here at work and instantly loved his sound. The mixture of his soulful vocals and vibrant rhythmic beats is captivating. He’s created some amazing feel-good songs and I can’t wait to see them come to life on the stage. I know this show will definitely be a vibe.”

“I first came across Emma Jean Thackray on Gilles Peterson’s BBC Radio 6 show and then fell in love with her debut album Yellow released in 2021, a psychedelic trip through cosmic jazz and spiritual funk. She has been on the rise for the last few years and is now receiving huge recognition for such a spell-binding record. The album is full of compositions, instrumentation, and vocal harmonies that keep you on your toes from start to finish. From one moment, such as in the opener ‘Mercury’, you’re journeying through an ethereal realm of musical consciousness, then you’re treated to the soulful and spiritual jazz-funk of ‘Third Eye’ where Thackray wants you to awaken, but suddenly you’re transported to a tropical dancefloor with the disco-fuelled track ‘Sun’ where Thackray joyously sings that “brighter days are coming”, and I believe her. It’s a mesmerising and uplifting musical voyage, an expertly crafted album. One of my favourite releases from 2021 which now sits in prime place on my vinyl record shelf, with its beautiful, hallucinogenic artwork – I can’t wait to experience this album in all its glory live.”

“I only came across SUCHI very recently through the Yung Singh Presents Daytimers Boiler Room takeover so was proper chuffed to see her confirmed as part of the line-up for Dialled In at EartH alongside so many other amazing artists from the new South Asian underground. Her Through The Fog show on the New Delhi-headquartered Boxout.fm. is well worth checking out, a hot mix of the best in breaks, house, electro and techno. Unsurprisingly, she was also named in Mixmag’s Top Artists to Watch in 2022.”

“When was the last time you put a new album on, and listened the whole way through? I highly recommend breaking that dry spell and doing this with Afrique Victime, Mdou Moctar’s 2021 album. Mdou Moctar is a Tuareg guitarist that adapts the classical Tuareg guitar music to modern times – fusing psychedelia, introspection and some incredible rock music that’s perfect for getting lost in. Don’t miss Mdou and his band at EartH in April – I can’t wait to hear those guitar solos reverberating off our walls.”

By Bronya Francis, Head of Marketing:

“Jessy Lanza is one of my all-time favourites. I’d listen to anything Hyperdub released in the early 2010s when I was a music writer, so inevitably listened to her first record when it landed in my inbox. I instantly was hooked on Pull My Hair Back after the first listen – and still play the LP regularly, it doesn’t get old for me. I enjoy footwork and dance music that originated in Chicago historically, and love an RnB-style vocal, and she weaves these elements – amongst many other influences – into her music seamlessly and originally.

She released a DJ Kicks compilation recently and I’m looking forward to hearing her play that in person; I also hope she plays some tracks from her back catalogue like Strange Emotion (her take on a ballad which closes her first record), ‘It Means I Love You’ from her second album Oh No, and “Baby Love’ from her latest record All The Time.

“A friend made me listen to Helado Negro four or five years ago, I think she first shared the EP he’d done with Juliana Barwick (Ombre). Seeing him live, he has the best, very subtle dances on stage – when you notice it, it’s incredible – the man has moves! It’s been a long time since he’s played in London, so there might be a lot of people in the room [for his gig here in May] who have never seen him and are really excited to discover his music live – but don’t necessarily know what to expect. And just like I was, I think they will be pleasantly surprised by his live set, the arrangements, the hip moves… It’s going to be a beautiful show.”