FANCY SEEING YOU HERE: GETTING CAUGHT UP WITH OUGHT

Ought are the kind of band that make you realise you’ve grown accustomed to junk-listening for the last six months. Formed in 2012, each song that this Montreal four-piece have created in their modest back catalogue has fresh hooks and sonic depth. Front man Tim Darcy doesn’t so much sing as rant seemingly meaningless soundbites that can only be decoded through repeated listening. This band don’t make sausage factory music to an established recipe for easy consumption – they demand emotional engagement and commitment. 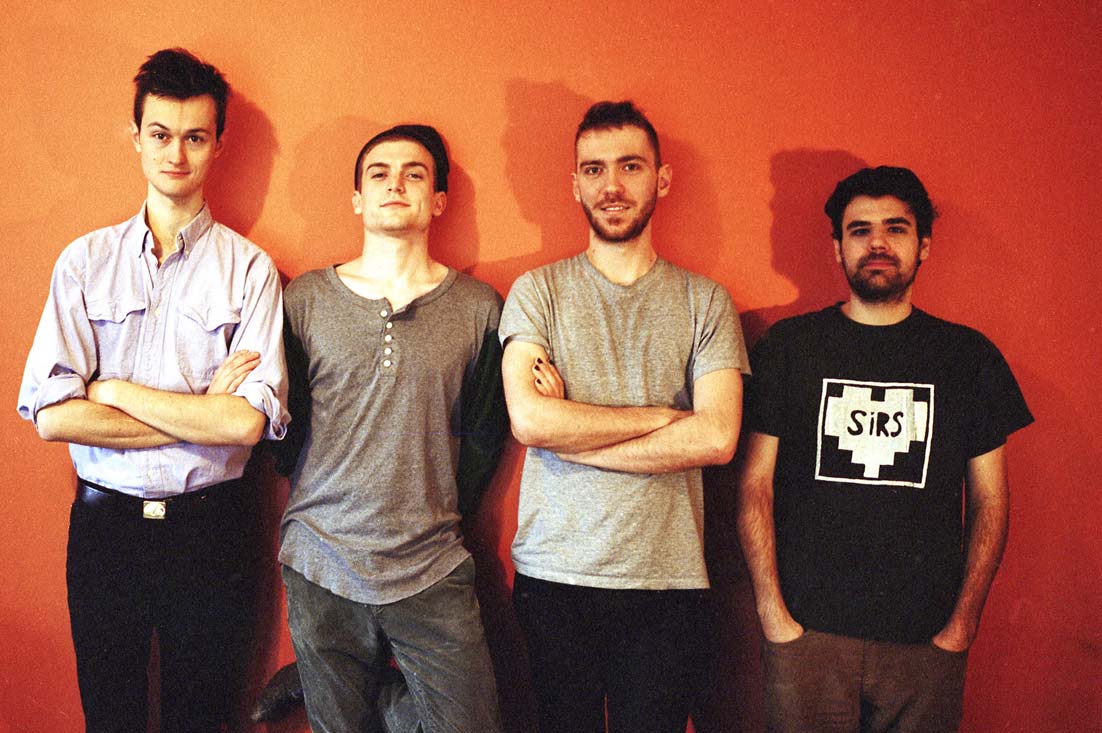 While debut album More Than Any Other Day garnered the band comparisons to Talking Heads, Parquet Courts and Viet Cong, latest singles Beautiful Blue Sky and Men for Miles show just how keen Ought are to create music that is totally arresting and unique. Now, finally gaining recognition outside of their home city, Ought are headed to Village Underground on 1st September. We caught up with the band a week before their show and just a few days before the release of their second album, Sun Coming Down.

What’s it like to be in Ought right now?

Ben S: We’re on tour right now, so a lot of our time is spent reading, writing, drawing, and chatting at 140km/h in a metal box. We’re getting quite good at it, actually. Our secret language is becoming increasingly coded and codified, to the point where both everything and nothing is quite funny. Personally, I’m constructing a fictional city in my head to pass the time and listening to recordings of professors discussing topics from Maimonides to dark matter. The point is the shows, however, and those have been fab thus far. When you first look at a tour on paper, you see a sequence of cities, dates and venues. It’s when these blank spaces become memories of people and places that the idea of “tour” becomes particularly lovely for me.

Tim, you have a really distinctive way of fronting the band. It’s easy to draw comparisons but where do you think you learnt to perform in such a way?

Tim D: I don’t think I can point to any one thing in particular. I’ve had a fairly similar experience performing in most bands I’ve been in. Playing live is a pretty transporting experience for me. Even when I was singing acoustic, I would sing very intensely.

“I couldn’t really think about playing the songs any differently...Sometimes I think of it as like a conjuring or building up energy so that certain moments will hit or fall like they’re meant to.” Tim

People used to say they couldn’t understand the words. In this band I’ve been marrying live performance (which is chaotic) with spoken word, which is more focused on clarity and sparseness for me. I couldn’t really think about playing the songs any differently. Certain ways of moving my body are so integral to the song… Sometimes I think of it as like a conjuring or building up energy so that certain moments will hit or fall like they’re meant to. It’s as much for my connection to the song as it is for any performance.

Ought was conceived during (Québécois student protest) Printemps Erable and this idea of literally making noise as a form of protest seems to be a major impression from that time. How much do you relate to that? How political do you think a band’s voice should be?

Tim D: Ought definitely has interest in the idea of noise, but also in harmony.Every time we write together, we are in uncharted waters. For me, this is an essential element of noise. Not talking about distortion or feedback but of something that is outside of normality. Not that we’re reinventing the wheel, far from it, but we do a bit of voyaging and coming back with something odd we try to make into a song.

As far as ‘political’ music goes, there are artists that never mention an iota of politics that move me very deeply, have helped me through rough times. Though, I suppose I always have this sense that those artists are good people, and I would be hurt to find that they were not. Our music is a product of who we are as people, we definitely were steeped in the strike while it was happening, and are a product of our interactions with those around us. But there are things that are beliefs I have, that are essentially in my blood, that I trace back to something my amazing mother said, rather than to a ‘political’ person I went to school with. I take inspiration from and love many artists who are engaged and work positively against the status quo (which, for me, is essentially the acceptance of suffering). This is all to say that I can’t think of any ‘shoulds’ for an artist, it’s far less cut and dry than that.

What are the things currently keeping Ought awake at night?

Ben S: I personally don’t have trouble sleeping unless I drink coffee too late at night. On the other hand, the continued existence of capitalism and the state, and the symptoms that follow.

Across both your first album and the new single, I found there’s this huge feeling of dissatisfaction and not accepting your lot. Arguably this is where some of the best music is made. But what does make you happy, as a band?

Tim D: We like to joke around together, eat good and simple food. I would put other people’s art very high on the list. We’re always very excited about whatever we’re listening to or watching or reading individually. Meeting other great people on tour.

What did you learn from More Than Any Other Day? What experiences did you pass over to new album Sun Coming Down and what did you want to leave in 2014?

Ben S: It’s hard to say that we learned anything about MTAOD after its release, because all the work was done before that point. Our songwriting process remained virtually identical to MTAOD, but for that process we were all in school and working, so we would only get together a few times a week. For SCD we practiced almost everyday for the winter of 2015, so the process was compacted. In many ways this reflects in the previous year since MTAOD dropped, where we toured virtually non-stop until December. We became more technically proficient, I believe, and also spent a lot of time listening to a rather wide range of music. We had all discussed wanting to write shorter songs than on MTAOD but ended up with another eight song album with the shortest song being 3:30.

Whilst researching this piece, I was reading through your Twitter feed and it’s intercepted with adverts for milk and free coffee from phone companies and all of this stuff that so obviously jars with some of the things you’re sharing on there. Do you see things like Twitter and Facebook as impinging on your creative efforts – do you have to avoid that stuff when you’re writing and recording, or does it not really bother you? What good does the internet bring to your band?

Tim D: Is tough to touch this because advertising is so ubiquitous now. Sometimes when I go back my childhood home, I am reminded of how much space there is (or can be) in the world. Not being constantly bombarded with stimuli leaves me room to have thoughts that are more whole, that aren’t chipped away at by ads and other things that we bring in more voluntarily.

“I can’t really fathom listening to an ad in the middle of playing back an album … I would so much rather pinch together 10 dollars and not interrupt my connection to this thing.” Tim

I’m not on social media and I don’t really touch twitter that often for that same reason. Other members of the band really connect with it. I do love the benefits of it, which is connecting with fans and other artists we admire. So I guess my position is selfish in that I reap the benefits without using the service.

I don’t blame people for advertising. Even when I was making zines in high school, I would get local businesses to take out ads to cover printing costs. What’s happening now though is off the charts. Every square inch of the earth can’t be covered with logos. I can’t really fathom listening to an ad in the middle of playing back an album for example. I would so much rather pinch together 10 dollars and not interrupt my connection to this thing.

Where do you think people can find a truth in modern day life?

Tim D: Isn’t everything truth? Even if someone is lying to you, they have lied, it has happened, and so that is the truth of the moment. Veneers that we put up are just as real as the truths they conceal. In that same vein, sales and marketing and political agendas are truth even if they are wool over the eyes. Seeing the wool as real allows you to pull it off, or to live life more sanely. Also maybe there is a difference between ‘true’ and ‘honest’. Some of the most distressing moments for me have been when I have rejected my surroundings… None of this (‘modern life’, as you put it) is real, has meaning… For me at least, there has been a journey of finding balance, still feeling detached from certain aspects of how things are, while allowing my feet to be on the ground so as to feel at peace. Other people, much art, are beacons in all that dead space for me… like tin-hole punches through to something that feels much more honest and real.

Shopping and Weddings are supporting you on the night- are there any other new bands here or elsewhere that you’re excited by?

Tim D: Shopping are amazing. There are a lot of great bands happening at the moment. The mighty Lungbutter in Montreal, Cheap Wig, The Past (both Montreal as well). In the UK there was Joanna Gruesome, and from Philly we love Pinkwash.

Ben S: The band Yung from Aarhus [in Denmark] we just played with for the third time in a year. They are smart songwriters and a pretty great time. Our van broke down in Denmark so we ended up hanging with them for three days in their hometown.

What do you strive for?
Ben S: I think most importantly we strive to make music we care about. After this, to play good shows in as many spaces we care about, with bands we care about. We want to stand by the decisions we make as a band and to constantly keep community in focus.