Interview originally published on London In Stereo, reproduced with permission.
Watch Portico and Snow Ghosts performing live at the bottom of this page

As much as certain audiences would love musicians to keep making the same successful song, true artists never really stay still. Music is made by the living and attempting to keep it in stasis, kills it. Musical history is littered with artists making musical moves leaving devoted audiences feeling betrayed. Worse still is when musicians come from passionately preserved scenes such as folk or jazz. 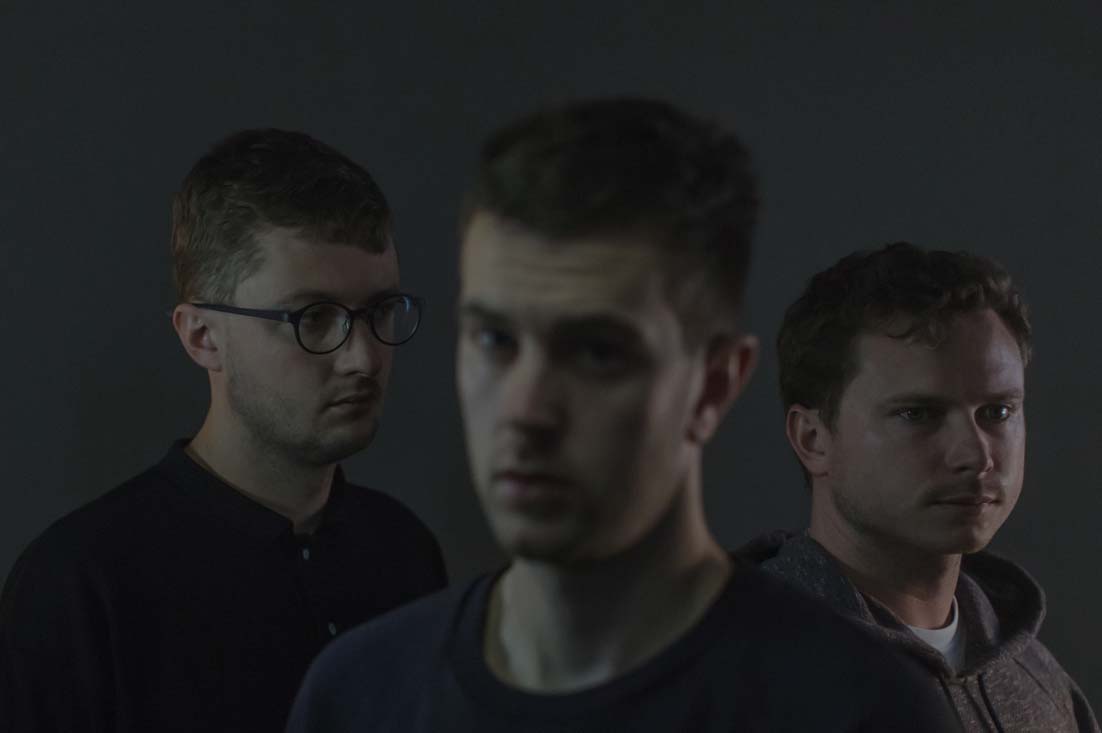 “We did this gig in Rotterdam and someone was demanding their money back claiming it was a different band – so there is a bit of a jazz backlash,” says Portico’s Jack Wyllie, “But it’s kind of exactly what we expected. Some people won’t like it but you like to think, over the course of time, you’ll gain more fans than you lose.”

Featuring three of the founding members of Portico Quartet, the name change to Portico is more than just an indication that their line-up has been diminished by one. It’s clear from the very first sub-bass thump that new album Living Fields is a sonic sea change. The saxophone parts are distorted beyond recognition and the trademark hang drums are out. In their place is a bank of skittering beats and electronic instruments that throb and pulse. So if this is a rebirth, why retain the name at all?

In many ways it does feel like a new project,” explains Jack “but in other ways there’s this dynamic between us. I’m creating ideas with the same people and we’re working together in the same way.”

We did this gig in Rotterdam and someone was demanding their money back claiming it was a different band.

For genuine followers of Portico, the new album is not entirely a sub-bass bomb dropped from nowhere. Portico Quartet developed through performance and busking but their second album Islawas significantly more studio based; even the trademark sounds of the hang were pitch shifted and manipulated. It’s precisely this refusal to stay still, mixed with their desire to fuse influences and push their sound to the limits which got their self-titled third album a second Mercury nomination. Their Live/Remix album released last year could also be seen as an indication of where their sound was going, although Jack’s keen to point out that this wasn’t a strategic move.

“The remix project was a funny one – it was kind of remixes that have been amassed over the past five years or so, and we had all these live recordings as well so we decided to put something out. It didn’t feel like a particularly big statement. We were making music outside of Portico that was more electronic and that seeped over into the new stuff. This album is closer to the music we listen to, that we are interested in. It felt like in order to make it work we should make something we really liked, rather than continue in the lineage of the last three or four albums. That was quite liberating in a way.”

Going from jazz into electronic music meant that finding sounds through randomness and improvisation was still important. This has led to the sound of a Japanese Zen garden, previously sampled for a project with the Royal Academy of Arts, forming the rhythm for the track ‘Atacama’, for example. With the overall album atmosphere, Jack notes other inspiration coming from the way artists Tim Hecker and William Basinski compose music. Both take electronic sound, deliberately distort and degrade it to give their music a richer texture and stronger emotion. Sonically the music is being destroyed but in that destruction, something new is being born – this metaphor was also a starting point for Portico’s vocalists.

“We sent out a page of different themes – a documentary, a few poems, a few photographs, which summed up what we were thinking about the album. That kind of gave it the thematic strand between all the tracks for more of a conceptual basis, I guess. So it wasn’t just one person singing about their girlfriend and one person singing about their night out, or whatever, it was all in-keeping with the themes that we wanted to develop. The documentary we sent out- was Nostalgia for the Light by Patricio Guzmán, in particular it summed up what we were feeling at the time, and some of the issues in our personal lives as well.”

The last Portico Quartet studio album featured their first vocal track courtesy of Cornelia, a friend of the band who had contributed vocals to Bonobo and Henry Saiz. For Living Fields more friends were called to contribute to the album: Jono McCleery had been working with the band for a while, Jamie Woon used to live with them when they were students and he introduced them to Joe Newman of Alt.J who appears on the impressive ‘101’. But the album was far from a nepotistic love-in, they spent a long time trying to find the right vocal fit for each track, that could bring emotional weight.

“We tried out working with a lot of different singers and actually spent almost a year of experimentation followed by eight months of putting an album together. We actually asked some quite random people to contribute, then it came back alright but not incredible. When you’re dealing with difficult subject matter, you need it to be able to trust that person with what you want to say.”

Living Fields is out on Ninja Tune at the end of this month but before then Portico have to take their sound on the road. The challenge is to keep the essence of the album but to give it new life on stage.

“There are some live parts to the album so you can take that and get the crux of it down for performance. Then it’s about working out how to build in some of the additional parts that give it some texture. A lot of that’s done through sampling, or when we can recreate the sound that comes from an affected symbol or saxophone. Sometimes it is quite hard- there’s so much going on, there’s so many different sounds from different places. You can’t for example bring a Japanese Zen garden on stage.”

We’d quite enjoy that in a way: ‘Ladies and Gentlemen please welcome on stage, Geoff Japanesezengarden on pebbles.’