“We’d always said, ‘if you ever do a film, we have to do the soundtrack,” Elizabeth Sankey, one half of Summer Camp, is explaining how her band came to create the soundtrack for Beyond Clueless. The only thing is, the voice on the other end of the line doesn’t quite sound like her. 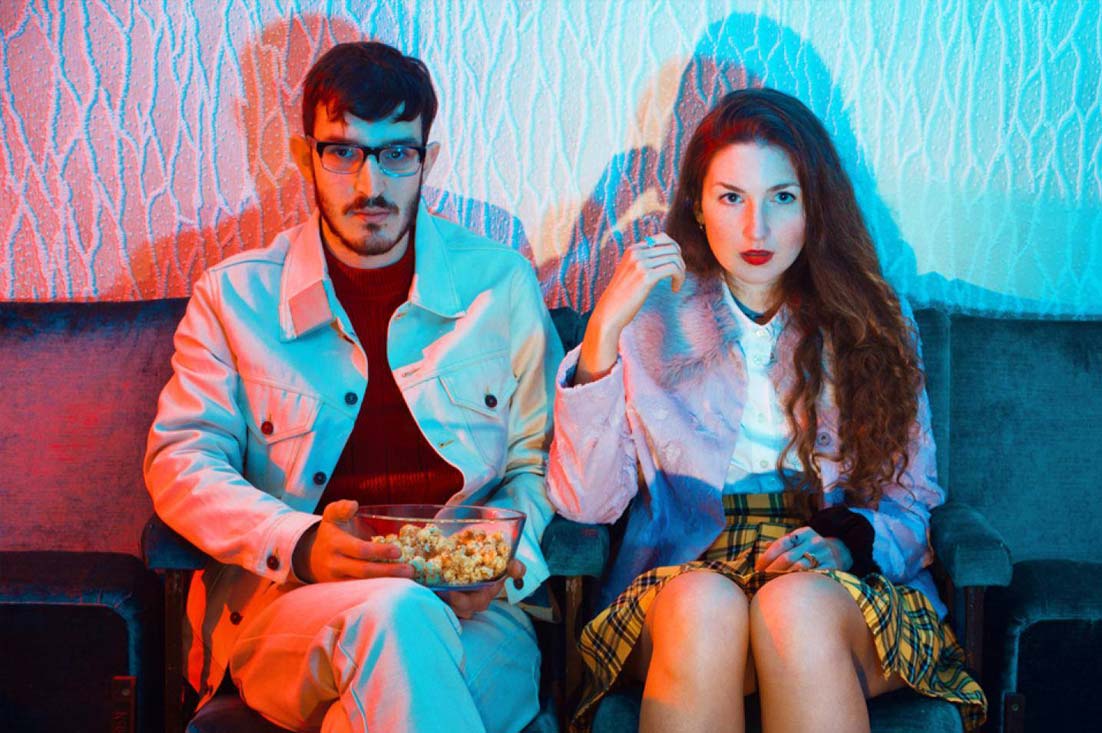 It’s slower, it pauses for what feels – like – forever, and it laughs for – you know – even longer. Thanks to a handy transcribe tool, I’m listening to our interview back at half speed, and it’s like we’ve both been placed under a Valley of the Dolls’ spell.

It’s actually an apt vocal metamorphosis for half an hour. Beyond Clueless, directed by friend and neighbour Charlie Lyne, is a film comprising meticulously analysed teen movie clips. Summer Camp’s further musical musings add an extra layer of reflection, tying together the disparate themes of Lyne’s cine-essay in neatly packaged lyrical bundles. The high school corridors, house parties and locker rooms we used as escapism in the 1980s and 90s are re-contextualised and given depth and further meaning, if only for – like – 90 minutes.

With such a saccharine subject matter, Lyne treads a careful line: on one hand, there’s the nostalgia for the films many of us grew up renting from Blockbuster every weekend, and the other, there’s the necessary critique of a genre that never really dealt with anything past the drama of prom night. Alongside ingeniously-cast narration from The Craft’s Fairuza Balk, Beyond Clueless straddles a strange time-lapse of sounding like it should be the 1990s, but with the benefit of hindsight. After all, we all know now that jocks don’t make the best prom dates, it’s not gonna work out in your favour if you bribe Heath Ledger to date the coolest girl in school and you should never say you’ll “be right back”.

LIKE SEARCHING FOR A MEANING IN A PAULY SHORE MOVIE

The music Sankey and her husband, Jeremy Warmsley, have created makes a home between shoegaze and pop, their title track reminiscent of The Cranberries and Letters to Cleo, whilst still sounding pleasingly post-Y2K.

According to Sankey, Lyne tried to watch every single film from the period, but the soundtrack was very much a work in progress as the film started to take shape: “There was a lot of debate about whether we include [certain films] and he involved us in all of that. But yeah, it was very much- ‘do we need this one- what about this one- have you watched this one yet?’”

Speaking about Lyne’s choice in material for the film, Sankey admits she was surprised initially: “In my head I thought it was going to be ‘oh these are the best films’, like Clueless and 10 Things I Hate About You. But it became much more about films that weren’t really well known. Because then you can tell more of the story in a way, they become more perfect examples of the point he was making.”

In fact, the majority of the films featured have an eery feeling of B-movies; stories that failed to hit their marks, teenage characters that will never become the Tumblr icons of Cher Horowitz and Torrance Shipman. Some of them are plain strange. I tell Sankey that pre-Beyond Clueless, I’d thought of myself as a bit of a teen film fan, only to realise how much more there was to watch.

“Yeah, and I think the ones that you know and love are quite often the ones that worked and are kind of perfect. And so there’s not really that much you can say about that. It’s the ones that are a bit weird that you can.”

Still at half speed, we hazily move on to the band’s latest release and third album, Bad Love. A self-identifying film obsessive, Sankey says their work on Beyond Clueless meant they came to Bad Love with a different perspective on the teen films they’d previously been inspired by:

“I was watching a lot of the ‘90s and ‘00s teen horror films, because I think there’s something quite interesting that came out of Beyond Clueless which is how the teen elements of romance and mythology of vampires and werewolves are very out of this world.

“The idea that someone would be filled by fish hooks is completely insane, but it’s kind of an amazing metaphor for the heightened emotion teenagers feel. Everyone goes a little bit nuts at that age, and I think teen horror films become this kind of representation of the darkness or the insanity that we all feel about things in our lives and other people.”

Sankey added: “We were also watching a lot of like, the Shining and other [Stanley] Kubrick stuff. There’s something very interesting and it’s a funny thing about Hollywood that here are more films that depict, like, insane chainsaw wielding serial killers than there are depicting homosexual relationships, or transsexual relationships, or relationships with people that aren’t white and good looking and middle class. And I think that’s very odd.”

It’s fine to watch someone get decapitated-
“- yeah, but emotional intimacy between two men is something people are really scared of. And even more with two women. Or anything that can’t be tied up into a little box.”

For post-Bad Love, Sankey says she’s been listening to a lot of soundtracks, and choosing a few favourites is tricky:

“I listen to a lot of them, so at the moment I like the Goodfellas soundtrack – it’s the kind of a similar thing where you have this violence but it’s all portrayed underneath doo-wop songs about how lovely your little baby is.

“Wes Anderson is obviously the master of soundtracks, and I actually find- one of my favourite soundtracks at the moment is Looking – it’s an HBO series. And it has an amazing soundtrack – John Grant, Anthony and the Johnsons and stuff.”

Are there any films that you’ve seen that you think, ‘I would love to go and remake the soundtrack’ because it’s a great film that would lend itself to that, or one where you think you could have done a different job from the original?

“So often my involvement and enjoyment comes a lot from the soundtrack- and those things marrying together.

“I just saw Mistress America. The music was really bad and really weird, I spent the first ten minutes being – like – is this a period film? SO I would maybe do the music for that.”

It’s no wonder soundtracks are so fresh in the minds of Summer Camp, as Sankey reveals Beyond Clueless won’t be the last collaboration between the band and Lyne:

“I should mention Jeremy is doing a film soundtrack at the moment. Another one with Charlie. Which I think I can talk about- it’s for a horror film. Jeremy wants to do film soundtracks now, forever.”

So there’s going to be a sequel to Beyond Clueless? Is there anything else you can give away?

“It’s really fucking scary. It’s a documentary again, but I haven’t watched it all the whole way through yet, and I’m not doing anything on it. So it’s his thing and it sounds amazing. It’s been quite weird for me because obviously we work in the same house and I’ve just been hearing these does an intense hungry zombie noise from the next room.”

Has he done any of the foley stuff, you know like cutting a lettuce up to sound like someone’s leg being sawed off?

“No, he’s been just – going out the front door- and we have a really noisy gate so he’s been recording that and slowing that down- he’s done a really good job.”

WHAT IS THIS, SOME SORT OF DORK OUTREACH PROGRAM?

We discuss why some people can happily watch teen films for days on end, while for others the genre never really appeals. I ask Sankey if she thinks people like teen films because it creates such an ensconcing world where there’s a whole set of rules to live by.

“It’s a weirdly easy world to conform to. There’s such a – like – strong identity in that kind-of American teen pop culture thing – everything from Point Horror to teen films and TV shows, and it’s very safe. You know where you are: it’s always kind of sunny, and everyone looks a certain way, with delineated groups, and you’d know where to fit in. It’s just pure escapism. And also the things that it presents aren’t actually ever really that challenging. There’s the rape in The Craft, and there’s obviously stuff in the horror films, but the main stuff is like “AM I A BET? AM I A BET?!” It’s not like ‘oh my god my Dad is doing drugs and abusing me’.

“Especially in the 80s, teen films were a lot about class. In Pretty in Pink [Molly Ringwald] is – literally – from the wrong side of the tracks. And James Spader is bullying because he wants to have sex with her but he can’t bring himself to do it because she’s so POOR. That’s the biggest problem that those teenagers face.”

Your friend is off sick from work and they want to watch teen films all day – which three would you say are the ones they should binge on?

I think you have to have John Cusack in there. I’d say Say Anything. Then I’d have to say Clueless because I don’t think you can watch a teen film that’s any more perfect than that. And then I’d say Chronicle.

All of the Sabrina the Teenage Witch Halloween episodes.

Person you love to hate most in teen films?

Paul Walker in She’s All That! He’s also in Varsity Blues as well, and he just plays the beautiful butt head jock really well, because you kind of love him.

Cat Stratford. Because she was one of the only feminists that there’s ever been in a teen film. So she’s really important.

Your favourite track on Bad Love?

Drive Past My House, because it was me trying to encapsulate the end of Good Will Hunting in a song.

And the hardest song – the one you had to work the longest on?

Keep Up – to sing it live is impossible.

Character from a teen film you’d most like to see play a zombie?

Cher. She just wouldn’t understand what was going on.

What cliques do you think you and Jeremy would be in, in high school?

Finally, are you excited to play Village Underground?