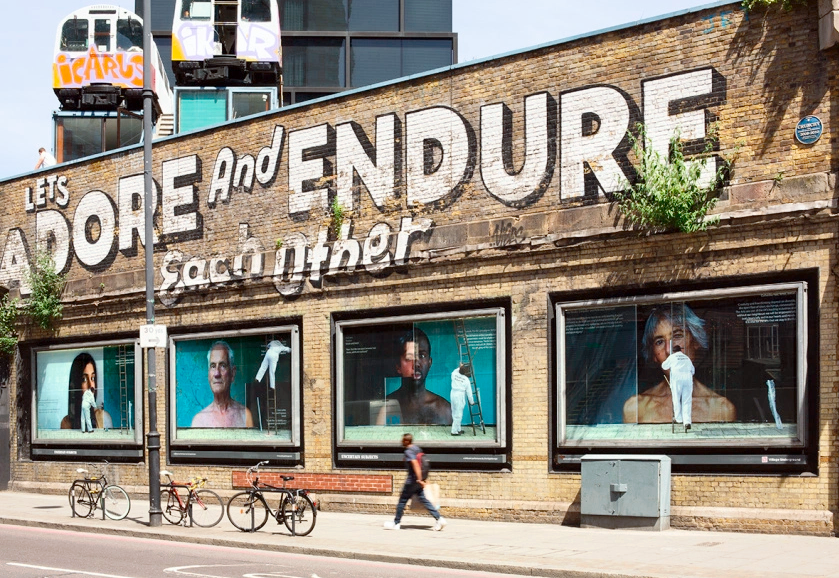 Our Great Eastern Wall is currently emblazoned with an incredible project called ‘Uncertain Subjects’ created by Uta Kögelsberger, situating itself between mail-art project, exhibition and campaign in defence of the freedom to live and work anywhere within the European Union.

We asked Uta a few questions about what inspired her to create ‘Uncertain Subjects’, the lessons she has learnt during the process and how Brexit has directly affected her wellbeing.

What made you decide to choose Brexit as the focus of your art?
On the morning after the referendum, I was travelling from the outskirts of Newcastle towards the city centre. Looking around me I thought to myself: “62% of you would rather I was not here”. Having spent all my adult working-life in this country that was a real blow to the system. But that was just the beginning of it: the way everything surrounding Brexit has been subject to continuing abuses of our democratic and lawful society has been gruelling to watch and has the potential to continue to be damaging well beyond Brexit. That morning on the train was the point when I decided I needed to do everything in my power to change this situation.

Also, just after the referendum, when I first started working on this series, there was absolutely no representation for those 48.1% of the country that wanted to remain in the EU. In a normal election, the party that does not end up in power still has representation in parliament. Here it was as if suddenly half of the country didn’t exist anymore. So the starting point was the desire to give a voice to those who felt like they no longer had any representation.

In the first instance, it started as a mail-art project about EU citizens with non-confirmed resident status. The intention was that the postcards would be sent around and that people whose doorsteps they landed on would have to decide what to do with these people who land on their doorstep. Do they stick them to a wall, store them away in a pile or put them in a bin? 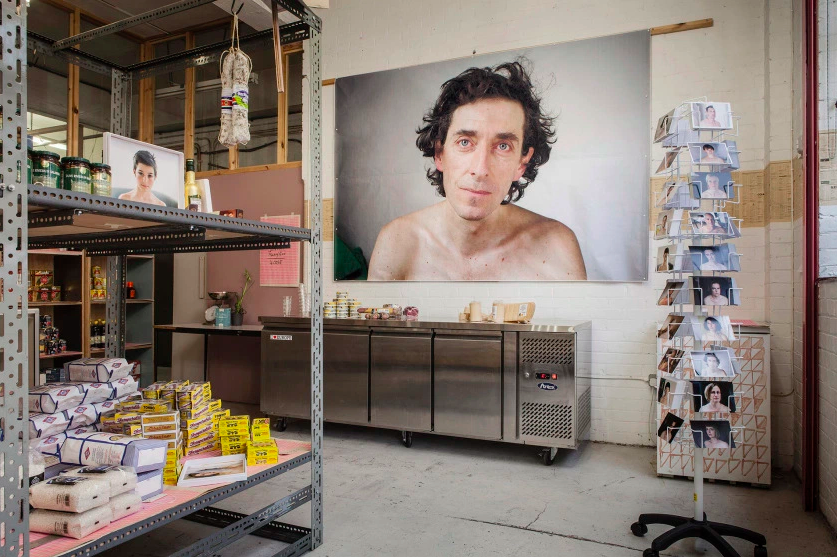 The photos of the people featured in your art are bare and stripped back – was that a conscious decision?
Each of the subjects is photographed in their home environment with bare shoulders. The current situation puts all of us exposed, regardless of our background or political position and the bare shoulders are a way to articulate that. But also I wanted to take the argument away from political discourse and to bring it back to bare humanity. This situation is not just a political move. It actually changes lives. I have been profoundly resistant to the assumption that those who voted remain represent the metropolitan elite. Since when is openness something that is only available to those who have an education. And indeed, many of those I photographed most certainly were in no way associated with the metropolitan elite, especially in Newcastle. So baring the shoulders was also a way of taking out visual references to class and social background.

How has Brexit directly affected you – either your sense of self, wellbeing etc?
I had to become British.

Do you think Brexit poses a risk to creativity and the arts in Britain?
Yes. It is already happening. Many of the people form the cultural industries I photographed have decided to leave the UK. Not only do they feel this country no longer represents their best interests, but also the underlying inward-looking mentality that Brexit vote revealed, led them to look for other places where they can pursue their careers. In that sense, this series has felt like documenting a society that is changing under our own eyes and beyond recognition.

There are of course also the more practical things that have not yet been agreed upon as such. Under the current government, it seems likely that restrictions on freedom of movement between the continent and the UK, crossing borders for both people and works of art will become much more difficult. That will not only affect the commercial sector, but also that part of the art world that generates new thinking: For example, I organise a talk series that involves high profile, international curators. If speakers will need a temporary work permit, it will no longer be possible for me to create such an open and diverse platform, simply because the logistics would make it near impossible to co-ordinate. And then, of course, there is the impact it will have on diversity in higher education. Articles about high-ranking international academic being sent back home because the Home Office will not extend their visas are filling the newspapers. When this starts to also extend to EU citizens that will have a very strong impact on the community and the independent art sector that often looks to academia for funding.

What has the ‘Uncertain Subjects’ project taught you?
In the first instance, it has taught me about the power of making work in the public realm: The works on the Shoreditch Wall are stills from a performance I first staged for Art Night, London and then again for the Brighton Photo Biennial, where it was shown on the side of a container: 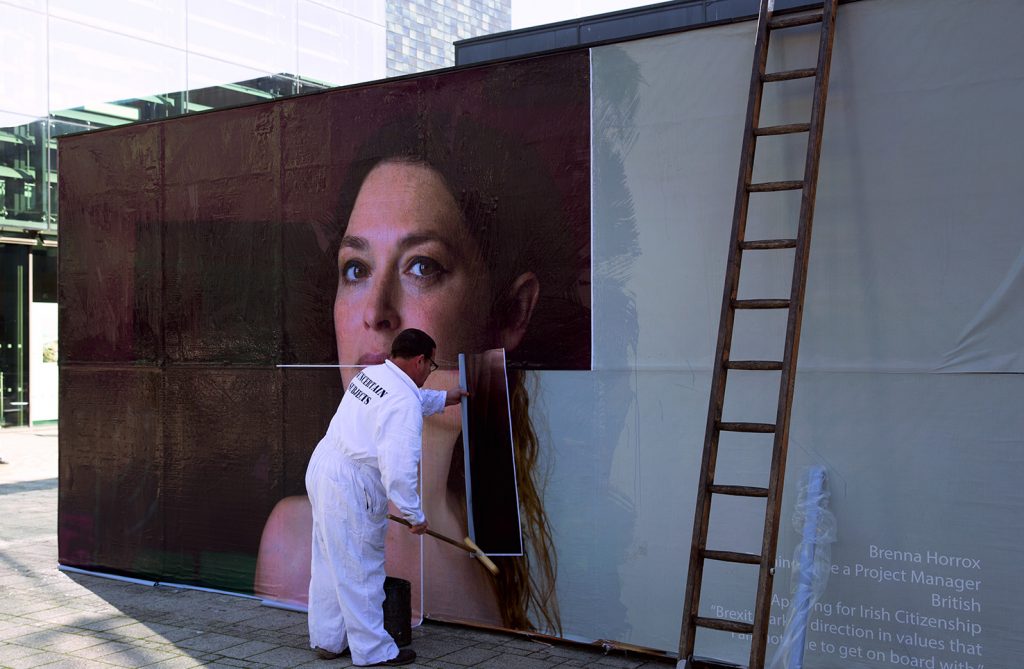 In Newcastle it was shown on a balcony in the Grainger Market adding an element of theatre: 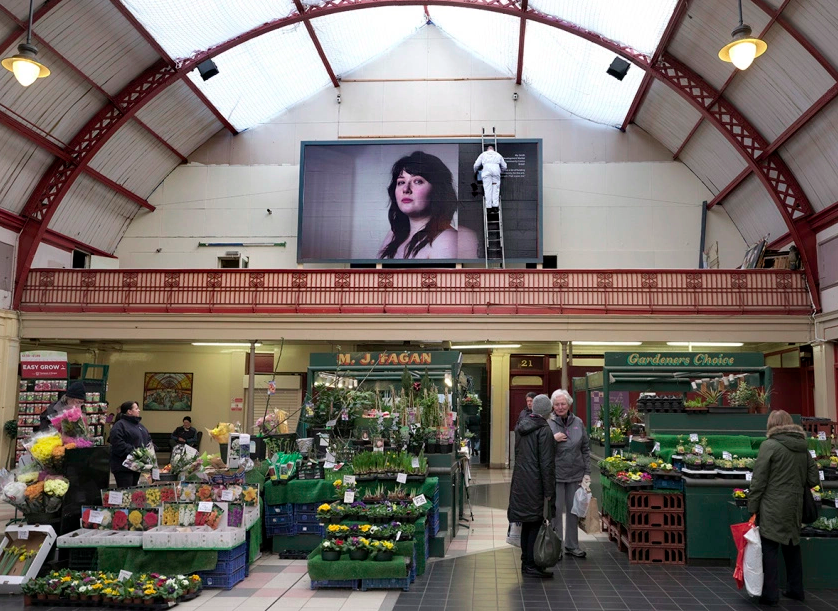 In each of these two cases, the work was a performance over the duration of the exhibitions, with one billboard going on over the next, one voice drowning out the next until you ended up with a big sandwich of billboards of silenced voices. I worked with an amazing billboard plasterer, who has been doing this all his life and he was very much a part of the work, especially with the art night performance where he was dragging a heavy, six-meter ladder from one edge of the billboard to the other. In short, the performance was very physical and very theatrical. There was seating for the audience if they wanted to watch and many stayed for hours watching one person go up after the other.

What was amazing about realising these works in the public domain is how much discussion and conversation they generated. Many people have felt like they are not being considered in the Brexit negotiations. All the while it is having a real-life impact on them. I know of long-term relationships, where this was the straw that broke the camels back. I know of people who have suffered from depression, people who have already had to close parts of their businesses because of the impact of the low value of the pound. Everybody has some kind of position on the issue. Working in the public realm has proven to be an amazing means of creating a platform to open up the conversation.

On a more personal level, I have never worked so closely with people. There is something very special about this process of portraiture, especially the bearing your shoulders. It creates a very particular intimacy and has to be based on real mutual trust. It feels like both the sitters and me as the photographer are giving something to the other in this mutual exchange.

What can we expect from you in the future?
I am working on two new works that are loosely based on Uncertain Subjects: one is a video work related to the process of becoming British, the other a flash mob-related to the circulation of fake news. I am also working on a major billboard takeover in Newcastle. This will be a curatorial project that tries to disempower the way in which politicians instrumentalise divisions for their own benefits. So, instead of looking at what pulls us apart it tries to reconnect to what brings us together.