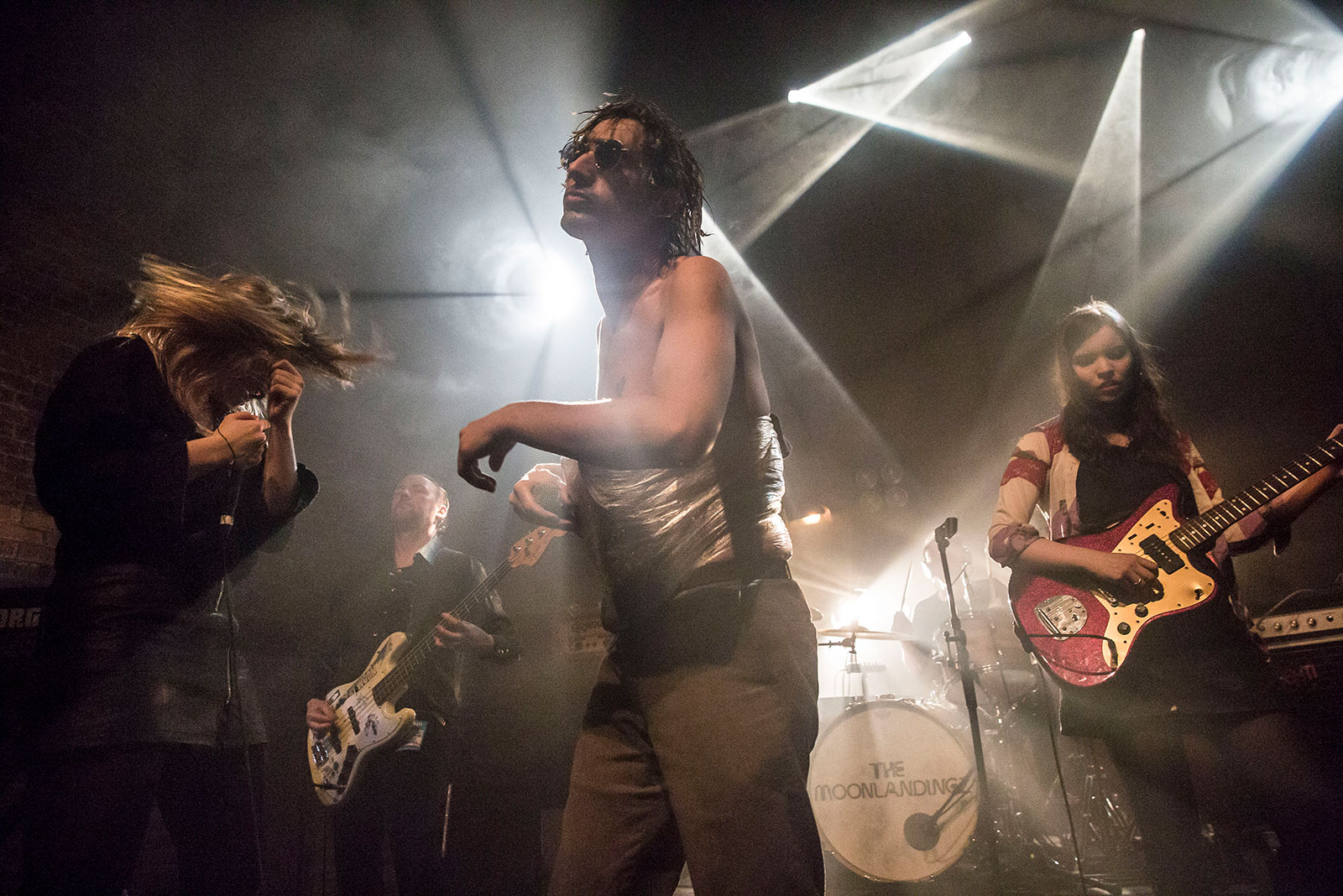 The set opened with Mongolian/Tibetan throat singing, followed by Chinese folk songs; either the band was trolling the audience or they were simply expanding cultural horizons with obscure world music. Either way, it confused everyone, but was the proverbial calm before the oncoming storm.

Soon after, the band arrived onstage with Lias Saoudi – channeling his fictitious persona of lead singer, Johnny Rocket – sauntering barefoot with his shoes bound to his abdomen with cling film; sporting a crudely painted monobrow, circular sunglasses and slicked back hair (it retained its shape all evening) full of what looked like raw cake mix whilst clutching a bottle of Pinot Noir.

What ensued next was approximately 90 minutes of unbridled mayhem, during which The Moonlandingz gleefully revel in their game of genre-roulette – blending rock and roll, punk and electronica with meta level self-awareness, sharply wry lyricism and an offbeat cynicality – enforced by a confrontational, avante garde bravado. The band’s explosive presence and energy was equally reciprocated by the thunderously volatile audience. Splashes of sweat and beer filled the sinuses amidst the crowd, thrashing into one another like a tsunami, to some clambering up onto the stage; the few who were successful were quickly hurled back into the ocean of madness by Saoudi himself.

Opening with Vessels, raw energy and razor-sharp guitar licks reminiscent of The Cramps, soon evolved into Black Hanz; a psychedelic synth-pop dive into hedonism. The set was comprised of mostly tracks off their newly released album, ‘Interplanatary Class Classics’, concluding with the blast of techno insanity that is ‘Man In Me Lyfe’ – with the unnerving repetition of the line: “The man in my life, he’s got the whole thing covered.” Saoudi’s feral but fervent charisma in particular stood out as being both captivating as it was confounding; channeling Iggy Pop, Lux Interior and Fred Schneider respectively.

Nevertheless, watching The Moonlandingz was a spectacle in of itself. They shattered my preconceptions and resulted in me being left rattled, but exhilarated. What I enjoyed the most was not just the unorthodox nature of the band themselves, but the fact I was viscerally experiencing rock and roll in its purest form; unrehearsed, unfiltered and unpredictable – chaos at its loudest and proudest.

You can’t tell from this snap – but @themoonlandingz are tearing @villunderlondon apart. 👌👌👌

brilliant and totally wacked out @themoonlandingz @villunderlondon last night. just a normal Tuesday night out with the aliens

Oh my word The Moonlandingz absolutely smashed it @villunderlondon Not sure if that cardboard/bacofoil corset will… https://t.co/wJXVnDwpsB